Self history with: Joomla, Drupal and WordPress

Back in 1999, we did not have access to stuff like WordPress or any CMS. Doing websites was some short of a challenge and persistence. I have been doing them since mid-2000 if I remember well, with my first big attempt at 2003.

During such time, I have learned PHP, MySQL, some Javascript and whatever I have come across with it. Of course, back in the day, you did not have anything named «Joomla», «Drupal» or «WordPress». If you wanted a CMS, you either spend a bunch of bucks or ended making one by yourself. I mostly did stuff with my bare hands.

While doing stuff yourself seems nice, there is a moment where you eventually grow tired. You just want to add content and have everything work without issues.

While adding stuff was not hard… it was not really efficient, in the way I did stuff… so, with the time you simply stopped to do so.

Somewhere in 2010, I started to be serious about retaking and having a much more professional site and so on. I had a bunch of experience with a website from back 2004, but I was more than sure that did not want to go all the same road all once again.

Gathered then some of my pieces around: Plain HTML is a big NO NO. It is going to be a pain to keep such things. Have you tried to edit 10 HTML files? When you are at the 5th one, you already want to do something else.

The second way to go was PHP again with some tricks, but NO. It was very unprofessional. While I for sure were able to make it look nice and such… in the long run, it was falling into the same pitfall than before… or worst… maybe open a random bug can.

What was the solution then? At that time, there were now some names and the CMS started to take everything around.

One of the first considerations I had was the PHP-Nuke CMS, that I remembered seeing from somewhere, but do not remember what exactly made me not to give it a try.After some extra search eventually had a few names to give it a try: Joomla,

After some extra search eventually had a few names to give it a try: Joomla, Drupal and WordPress.

I am not going to be fair with this engine as I do not remember giving it enough chances.

When I installed and give it a test run, I felt like that Joomla was quite fitting to what I needed back in the day: A simple blogging platform.

Played with it a few hours until I went ahead to try and customize it. There is where I found the very first problem with it. 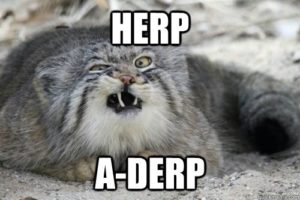 Maybe my reaction if I did it today

I ended having no idea how to modify the themes I had downloaded for it.

Maybe if I see the code today, I would be like «why I was so derp?». But back at that day, I spend a fair amount of hours trying to make it look nice and other stuff… just to give up eventually.

I did not give WordPress a try during the 2010-2011 because… well… a bunch of people was like «It is really bloated, avoid it at all costs». Since the CPU use and memory was a concern for me, back at that day, I decided not to question that, so moved to the next one in the line: Drupal.

At that moment, Drupal was in its version 6. Installing was… easy… configuration was not all that bad. Adding and editing a theme was relatively easy after a few hacks here and there… urg… really bad habit from that day.

While for sure getting used to the administration and blocks was… hard… I felt like that it had a lot of potential. Of course, if you did not mind to get messy with the code.

One thing that I do remember is that a bunch of pluggings did not work on it. So setting up the installation was like a trial and error process… because you never had any indication from the Drupal website if the plugin you downloaded might work on your site or version.

And as the days went on, stuff started to surface and become more and more annoying.

For example, keeping Drupal updated was a struggle on itself… as I needed to re-do some of my changes into it… or something random did broke… you never knew. The experience was not really pleasurable after a couple of years… and that is what you earn when you mess with the code.

Eventually, my installation did fall to the hands of hackers given that I was unable to keep it updated and was avoiding to move to Drupal 7 the most I could because… it was going to break many things.

I for sure will give the new Drupal 8 a try sometime soon, but it is clear that it needs full-time attention. Something that I can’t afford most of the time until a good change happens here.

Like mentioned before, back in 2010-2011, I simply discarded this one because… well… people said it was boatled. But now in 2016, computing power is better suitable than what it was at 2010. And of course, had now access to better hardware at this host too.

My first «official» contact came during the set-up of a website that is hosted alongside this one. that person insisted on making a WordPress install, so it happened.

After being moving it for a few minutes, it was clear that it was like nothing else that I had tested before. Was so surprised that I ended doing an install on my own space too.

It was clear why it is used on 1 of every 4 websites on the internet.

Remember, not everyone knows PHP, HTML, CSS and such to be able to modify a website. Most people just can have a bad day and a very steep learning curve ahead with CMS.

And even if you do know such things, then you can modify themes and what not quite easily. I have been having a lot of fun doing that recently. It is enjoyable like never before. Still, I want to someday design my own theme rather than modify one.

While there are a bunch of articles there out talking about what system is better, I really can only say that is better just to give it a try to any of them.

But one thing is sure: WordPress is really way too easy to use and maintain, while Drupal is just really more powerful, but requires a lot more of dedication.

I am sure of a few things: I’ll keep using WordPress, but will try and tame Drupal eventually.

The importance of blogging or to blog →