Give XAMPP a try… if using WordPress

I used to be loyal to EasyPHP, but that changed once I come across XAMPP.

And all of that because I wanted to run WordPress locally. This, because I would need more computing power than I could get from a regular hosting account.

The Origin of the Problem

I have been using EasyPHP since earlier this decade. Found it to be quite easy to install, move and play with. I just copied over the whole «install» folder to an USB pen drive and I had a portable server.

Easy so far there.

Even deployed it into a very special project made for Quintana Roo’s state government, that has given some interesting results.

I trusted it because it could resist all sort of problems and because messing with it was very easy. At least for self-developed solutions.

Before giving it a new shot into windows, I installed a LAMP stack into my Kubuntu install. Loaded WordPress into it, and gave it a go.

Eventually, I found some problems like that I needed to change users for the folders (like setting «www-data» as the owner) and other issues.

Everything worked as it should. Even preventing me from doing silly unsafe things, but that meant also that I would need to spend extra time I did not have.

The solution? Go back to windows and use a solution I had there.

Updated EasyPHP and got it running as usual. Installed WordPress and when come to download the first plugins… oh problems.

Long history short: WordPress did not saw any transport. Activating cURL or SSH did not help. Neither FTP. Neither some voodoo magic I had at hand.

Aim for a solution

Spend a fair time of weekend searching for another solution to my problem. As I had spent already a lot on it.

Giving up was not an option at this point.

After some reading, apparently, I also needed an FTP server to be running in Windows to make stuff work.

In Linux, I just had used the FS_METHOD «direct» to make it work with no issues at sight. In windows, it just did not work. WordPress complained that there was no «transport available».

That is why then I needed to search for an alternative. There are plenty there.

After a couple of searches just came across XAMPP. And I almost did jump aboard when seeing what it does come bundled with.

Like any stack, it comes with Apache, MySQL/MariaSQL and PHP… and Perl and FTP! This last one is what made me jump on as it was bundled.

I am not going to bother explaining the steps on how to get yourself rolling into a local WordPress install, as there are plenty examples out there already. And because I installed it almost on automatic. 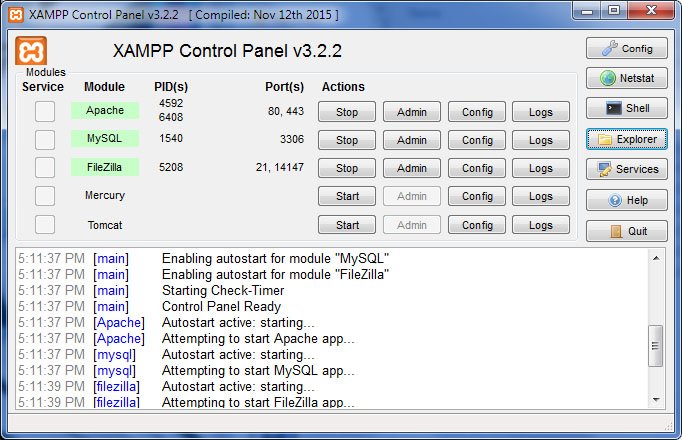 The control panel, with some of its options

Of course, I do not recommend to get the bitnami WordPress add-on. While installing WordPress is easy and is tempting to run another installer to do the work for you… the results are not always… nice.

Being able to do certain things locally will always be nice. And much faster than reliying in a remote server to process our requests.

It is a great way to rush development, try new things and of course… have the whole potential of your computer in case you need extra power while testing.

I have done one of the first steps needed… now, let’s see how far I can start to go when things start to fall on its place.